Evolution…it’s what Madonna is famous for.  One of the best parts of my job is that I get to evolve too…only in a less controversial manner. Naturally over time my needs change, and that of my family; one room becomes a nursery… another gets repurposed or renovated in some way, and everything shifts. I get to reexamine what we have and if it still works for us; constantly curating, not unlike Madonna and her ever-changing style.

Then there are those times when there isn’t a specific catalyst like a mid-life crises or nasty public divorce- you just need a change. Most people aren’t comfortable with change, but I love it. Probably a bit too much if that’s feasible. It’s exciting and fun to play with new possibilities. For example, I always wanted a Sputnik lamp over my dining room table. Always. We just weren’t able to make it happen for a very long time, so we found a compromise to do for the time being. It’s a beautiful fixture that looks like floating paper. Gorgeous…but not Sputnik. 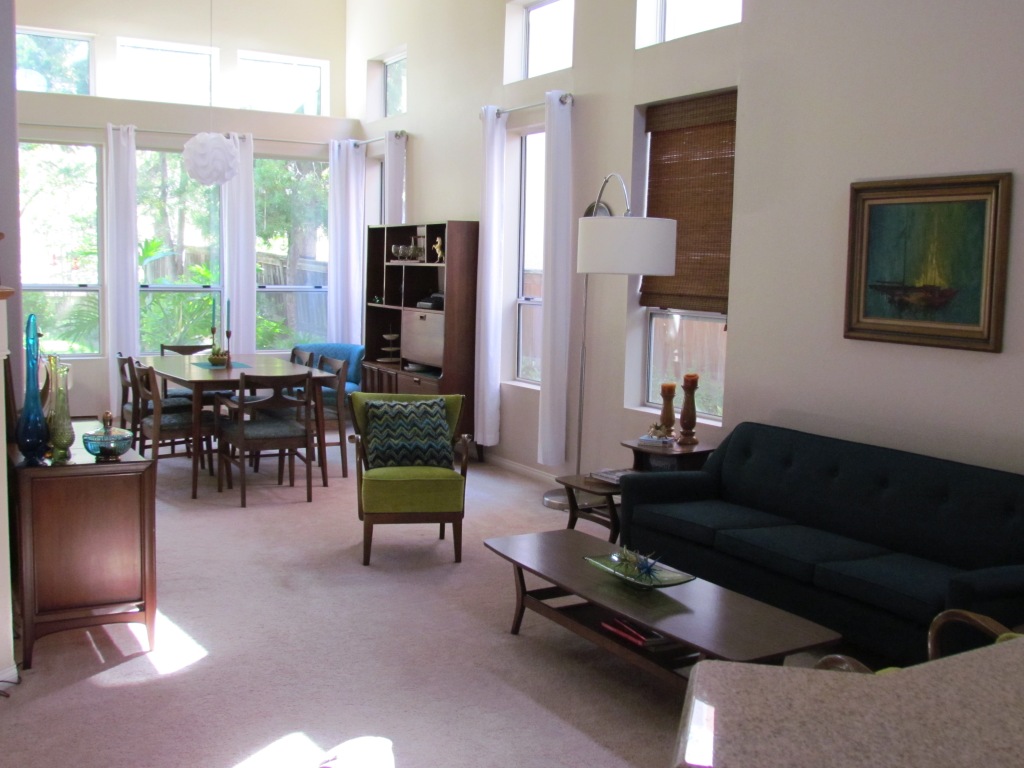 Cut to my birthday. The hubs wanted to do something big. I had just the thing. A custom Sputnik fixture from Lucent Lighting. 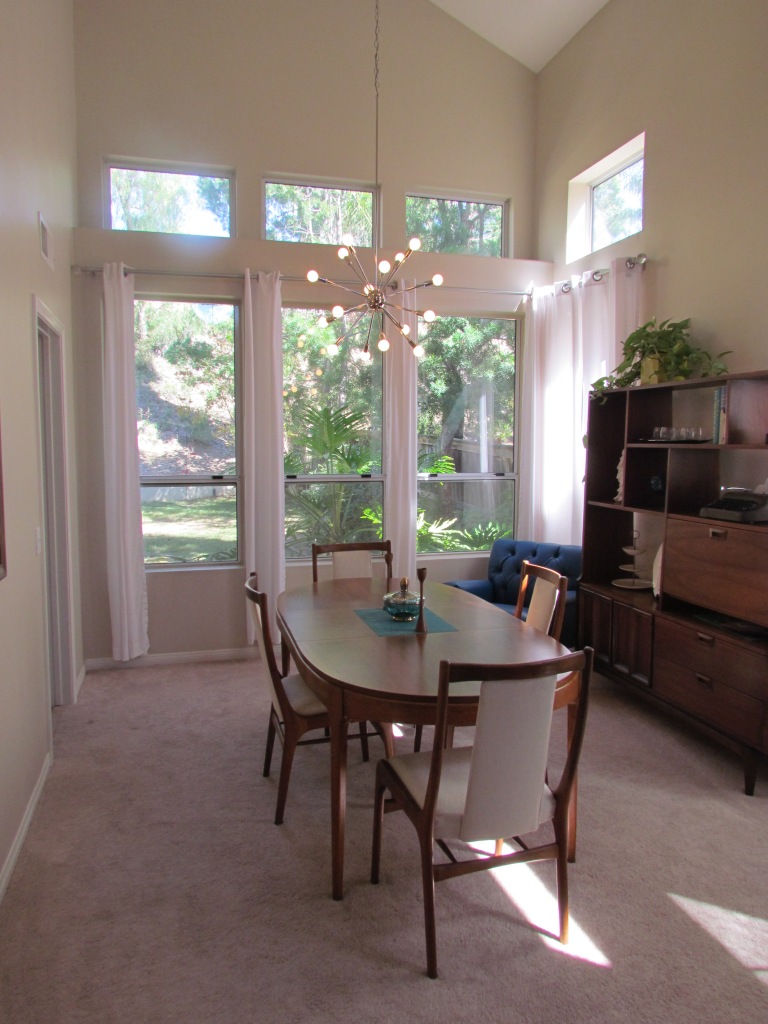 You’ll notice a couple of things are different here. Let’s first pause to drool over the new fixture. It’s got a dimmer, ya’ll!  Next, I sold my dreamy atomic Lenoir dining room set for a few reasons. One, it took up too much space visually when I really thought about it. Two, we have 4 people in our family, not 8. Thanksgiving and Christmas aren’t a good enough excuse to feel burdened by your own stuff. (I mean, have your read “The Life Changing Magic of Tidying Up”?!?!?)  I wanted something lighter in color that matched the tone of our wall unit – and when a friend at SeasonofChange posted her set for sale, I jumped at it! The table is thinner and takes up less space in more ways than one….but with the two leaves in place, it actually becomes longer than the previous table; a bonus at the holidays.

Before the baby was born, I had picked out a beautiful Nelson Bubble lamp to grace his nursery. It did just that…until summer came, and I became certain if we didn’t get a fan installed in my son’s room really quickly…he’d cook overnight. So that beautiful bubble lamp laid around the house, unused, and quite sad looking – until very recently, when we were finally able to get an electrician out to help run some lighting in our den.

These photos were taken at night…purposefully, so that you cannot see the kid toys in the yard everywhere behind our tiny living space.

This is the room we live in. Don’t judge. It’s not fancy – but it’s where we spill stuff (read: baby pees during diaper changes) watch t.v., play games and do kid stuff. The Nelson bubble lamp gives it a sort of grace it wouldn’t have otherwise. I think the room says, “Hey, We’re really cool deep down, but we have kids and shit…so our style is somewhat cramped. Come in….commiserate about your sloppy children. Let’s be friends.”

Speaking of messy kids….naturally when the baby came, I had to do the Target thing to organize the kid crap. Target FINALLY got with the MCM movement and introduced some pretty decent pieces. It meshes surprisingly well with the vibe we have going on. Right now, it’s full of toys and baby books and baskets full of whatnots I’d rather not be hauling back up to wee man’s room. Someday, it will hold other stuff like spare pairs of boob tassles (I can’t leave her alone)…or go up in a bedroom. Either way, we needed something functional that wouldn’t break the bank…and something that I wouldn’t be all upset about if it got scratched. Which it will. Inevitably.

So that’s how I’ve evolved over the past few months. It’s not finished by any means….there are so many things I’d like to do – like wood floors, and fig trees, and geometric rugs, a kitchen reno, and a bar cart somewhere. But for now, that’s all fantasy. Reality requires that we must use what we have…and be thankful.

Please stay tuned for the next blog. I’m really excited about my very first repurposing project. I’m going to turn an old, worthless 60’s remote speaker into a dog/cat bed. I’m such a purist….I usually demand things be left to their original uses, but in this case I finally found something that begged to be converted – and applicable for today.  Like Madonna. Bahahahahahaha.

That’s right, folks. Brass is back, and mixing finishes is no longer considered design disaster. And thank goodness too, because I don’t know if I could handle not having the approval of designers everywhere. HA!

You’ve probably heard the saying “rules are made to be broken,” and in the past mixing finishes such as silver, brass, gold, and brushed stainless steel was a big no-no. It’s pretty evident however, that idea is falling away and people are feeling more empowered to take home design into their own hands.  Interest in the mid-century modern aesthetic and designing with vintage pieces lends itself to a little mix and match. All the better, I say!

Here are some of my favorite brass pieces featured on Etsy.com that just go to show that brass is back in a big way (If you haven’t been to Etsy.com yet, you’re missing out.).

For more information about this piece, follow this link:

Link to Mr. Peacock and others: genrestoration

Brass as an Accent for Mid Century Modern furniture:

Link to this and more! See TheCottageCheese “Brass Menagerie”

Here’s a quick tip if you decide to put some brass into your design. Use Brasso. You can get it at Lowe’s or Home Depot….and I’ve tried the half and half vinegar/water mixture and haven’t had much luck. Brasso works beautifully to bring aged patina back to bright and shiny. (Make sure to use a soft, lint free cloth)

It’s evident to me no matter where you shop, that brass is definitely back – and not going anywhere anytime soon. Feel free to step out of the matchy-matchy box.  It can be done with excellent results!

I’m baaaaaaaack! Took a little breather in January but I’m back and boy do we have some fun trending MCM info to discuss. Now, I try to be a positive and upbeat person, but I can’t help but point out when things seem to be getting a little silly. The typical “Mad Men” bar cart is everywhere. Everyone wants one (myself included)….and the prices are going through the roof. It’s getting crazy, people. Here’s a picture perfect example of a bar cart from Entertainment Weekly:

Okay….so you get the idea. The bar cart is a place to congregate, entertain, serve drinks, talk about the day….and they conveniently roll from room to room! So what would you pay for a bar cart?  A few weeks back, I was in a thrift shop and spotted something labeled as a “utility shelf.” Well, it was mostly wood, had two shelves, it was on casters, and looked a lot like a bar cart. I snorted to myself when I saw the price tag of $45. Pretty bold for a thrift shop, right? Well, as I left, I noticed the “Everything 50% off” sign. I told myself I’d think about it and come back if I really wanted it. Later that day, I decided it was worth a trip back; but guess what? My bar cart was gone. Snapped up by a much smarter someone else. I’ve been kicking myself since. Here’s why: you really can’t find a bar cart on Etsy or Ebay for less than $100 now. Maybe someday, interest will die down, and we’ll see some relief-but I wouldn’t expect that to happen any time soon. In fact, a carbon copy of the Mad Men version pictured above is on Etsy right now for $4000.00. Yes. Four THOUSAND dollars. Apparently, it was designed in 1952 by Italian designer Cesare Lacca and it is “much sought after.” Now, I’m an Etsy store owner myself and I support other shop owners. But that price tag is ridiculous. Absolutely insane.

If you’re interested in building your own bar, Etsy.com is actually a great place to start. There are so many different variations; shape, size, material – you can decide what type of bar cart fits your space and budget. If you lean toward the industrial look and love projects, laceandlacquer.com featured a cool DIY tutorial on this type of cart:

I did find one bar cart under $100 from one of my favorite sellers on Etsy.com. Shop name is  Carouselandfolk. I love reasonable prices and reasonable sellers!

More to that point, here are a few other notable offerings…

If Hollywood Regency is more your style, Etsy seller “HardFinds” has this:

Need a pop of color? Check out ElectricMarigold:

Finally, if Typical Teak is your look – look no further. TwoGuysVintage has this:

As you can see, there still some fair prices out there – and so many different types of carts to choose from. Happy Shopping….and may your bar cart bring lots of entertaining and enjoyment to your future! By the way…if you find a deal or a steal – I’d love to hear about it!