I thought I’d found my happy place…until I arrived in Palm Springs, California. There is no place on earth quite like it. Palm Springs has one of the largest concentrations of mid-century modern architecture anywhere. The yearly offered Modernism Week is a one-of-a-kind celebration of these beautiful buildings and homes. It’s remarkable to think that so many of them have been preserved and restored so that they can be revered even today.
Frank Lloyd Wright, Richard Neutra, Albert Frey, William Cody and William Krisel are just a few of the incredible minds and hands that helped shape this gorgeous community. You cannot drive anywhere in Palm Springs without witnessing the simplicity and beauty of mid-century modern design.
Frank Sinatra, Bob Hope, William Holden and Steve McQueen called Palm Springs home at one point.
Next year, I fully intend on doing the Modernism Week right by attending the walking tours, bus tours and home tours. I’ll be saving up and have something to look forward to. However, if you’re on a budget like our family was this time around, you can take what I call the poor man’s tour any time of the year.
When you drive into Palm Springs, you can’t miss the gorgeous Tramway Gas Station built in 1965 by Albert Frey and Robson C. Chambers, which now serves as the city’s visitor center.
Pick up a “Map of Modern Palm Springs” for $5 and you will hold in your hand a detailed treasure map that features addresses and building history for all the modern points of interest in the city, which are too many to tackle in one day. For you nerd bomber Apple lovers, you can download the app at palmspringslife.com/psmodapp directly on to your Apple device.

Here are just a few pictures we took on our self-guided tour: 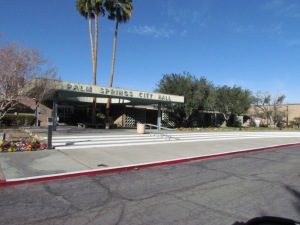 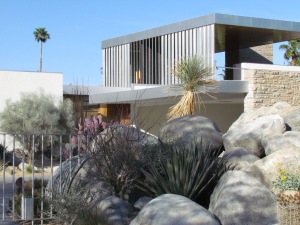 There is certainly no shortage of MCM to fill your cup. It’s definitely a new favorite spot for me. Now to manage a weekend away….now that I’ve seen it, I have to get back!

Next week, I’ll feature just one of the many mid-century modern/modish boutiques on Palm Canyon Drive. The shops alone are worth a trip…