Well, we’ve done it. Our MCM baby shower has come and gone. I have my mother and sisters-in-law to thank for all of their incredible efforts. You always worry about things coming together, people having a good time, and they really made all that happen beautifully. It was a fun time had by all and the shower was gorgeous. I’ll dive straight in, and share a few of the sources that were used.

It started with this mid-century modern-inspired invitation by EmilyAnnDesigns:

I mean….I’m not Katie Matthews….but that IS my nursery. Down to the gray crib and Nelson saucer light. Heaven.

We got to put my newly-refinished bar cart and Dorothy Thorpe collection to good use before it all sold! (Silver rimmed punch bowl and cups still available here)

The menu consisted of punch, finger sandwiches and veggie cups. And of course, a summery mango cake (that was OMG good).

The shower invitation served as decoration inspiration for the cake! Almost too cute to eat. Almost. 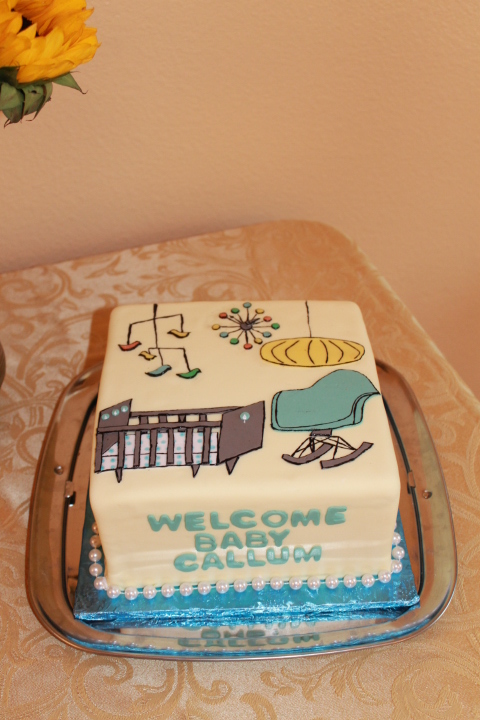 For those of you interested, Callum (pronounced cal-um) will be the baby’s name. It’s Scottish, as are my family’s origins. The Irish husband got the Irish name for the first child, and I claimed the second. The name is Scottish for “dove” and very seldom used in the U.S.- which is the point. So don’t go copying me, or I’ll have to kill you.

Ahem. Back to our shower!

There were games of course, including pinning a cloth diaper on as many balloons as you could while timed, a game where you had to wear a pink foam roller in your hair every time you were caught crossing your legs or arms, and a baby food naming contest. We also had a little Mad Men-type advertising game where you had to guess advertising slogans – and fill in which company ran the ad.

Guests could make wishes and leave sweet notes for baby on this “wishing tree.”

Wishing cards with adorable quotes printed at the bottom were also found on Etsy.com

Another really great idea were the retro-ey aprons and “photo booth” area complete with a Polaroid camera, and scrapbooking accessories. Guests were asked to dress up with the props of their choice, snap a photo, then decorate a page that would later go in a scrapbook for me and baby. A sweet and fantastically thoughtful idea!

Thanks to awesome Etsy shop owners, the creative minds on Pinterest, and most of all –  these three awesome ladies…

Baby and I are so blessed.