Sooooo excited to share the results of the nursery rocker re-upholstery project! One of the things I love so much about the mid-century modern movement is the furniture; how well it was made, and made to last. I don’t think there’s anything more fun than rescuing a vintage piece of furniture, and bringing it up to date – INSTEAD of buying new, over-priced furniture that is both cheap and did I mention over-priced? HA! New rocking chairs for a nursery run into the 4 digit figures. Can you imagine paying $1000 + for a rocking chair or glider? Me neither. On with our story.

A very good friend referred me to a local guy who did a fantastic job with our Craigslist-found chair that rocks, swivels and swishes.

I’ll cut to the chase – and feature the before photo:

I found some fabric that made me swoon at PopDecorFabrics on Etsy. As soon as it was delivered, I ran it over to my main man, Ruben.

He does beautiful work, as you’ll see……

No seriously. Let’s see that again: 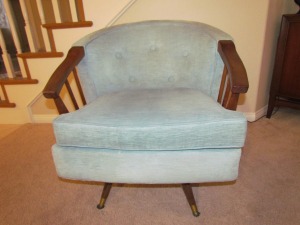 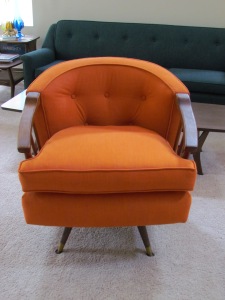 Now to make it baby puke-proof… but that’s a project for another day.

This week, I’ve been painting up a storm on my “Goodwill bookcase project” – and I’m hoping to be able to reveal that next week. This is going to be a DIY nursery if there ever was one, and I’m going to take you with me step by step!